His Excellency Sheikh Dr. Ahmed Nasser Al-Mohammed Al-Sabah, Minister of Foreign Affairs, heads the delegation of the State of Kuwait participating in the meeting of Foreign Ministers of the member states of the Organization of Islamic Cooperation, in the 48th session of the organization, held in the Pakistani capital, Islamabad 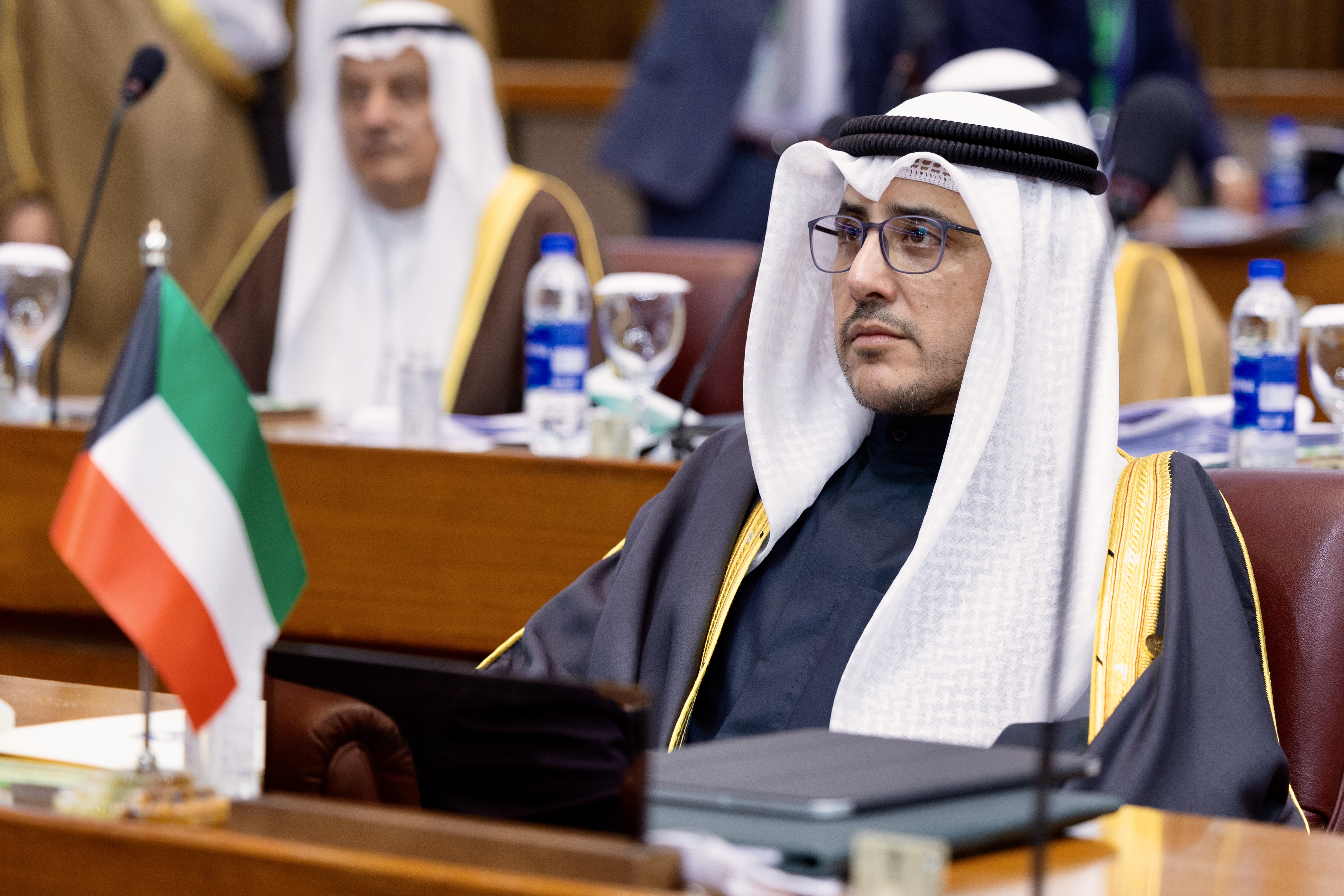 His Excellency Sheikh Dr. Ahmed Nasser Al-Mohammed Al-Sabah, Minister of Foreign Affairs, headed the delegation of the State of Kuwait participating in the meeting of Foreign Ministers of the member states of the Organization of Islamic Cooperation, in the 48th session of the organization, held in the Pakistani capital Islamabad during the period 22-23 March 2022. Where the Foreign Ministers of the member states of the organization discuss the current serious and escalating challenges facing the Islamic nation and the world, foremost of which is the Palestinian issue, in addition to a number of other issues of concern, including the fight against terrorism and Islamophobia, and the strengthening of the coordination and cooperation mechanism to achieve the maximum degree of unity and solidarity among the member states of the organization.

During this meeting, the State of Kuwait succeeded in obtaining a second term in the Human Rights Commission of the Organization of Islamic Cooperation, during the elections that took place during the meeting where the State of Kuwait unanimously won the confidence of the member states, which affirmed its leading role in the framework of joint international action towards promoting human rights Fundamental freedoms, the rule of law, and the support and defense of noble Islamic values globally.

His Excellency the Minister of Foreign Affairs delivered the State of Kuwait's speech at this meeting, the text of which was as follows:

"In the name of Allah the Merciful,

Your Excellency Shah Mahmood Qureshi - Minister of Foreign Affairs of the Islamic Republic of Pakistan,

Your Excellency Hussein Ibrahim Taha - Secretary General of the Organization of Islamic Cooperation,

Your Highnesses, Excellencies, Ministers of Foreign Affairs of the Organization of Islamic Cooperation,

At the onset, I would like to extend my sincere thanks and gratitude to the Islamic Republic of Pakistan for the generous hospitality and warm reception we have received, wishing them continued progress, success and prosperity. Thanks is also due to His Excellency Mr. Housumi Masoudou, Minister of Foreign Affairs of the Republic of Niger for the great efforts he made during his country's presidency of the work of your distinguished council. I also express my deep thanks to His Excellency the Secretary-General and the General Secretariat for the distinguished organization and preparation of this meeting of ours.

More than fifty-three years ago, this venerable organization was established following the Al-Aqsa fire in support of the Islamic nation for the struggle of the Palestinian people entrenched under the tyrannical and brutal Israeli occupation, which robbed the right of the Palestinian people to establish their independent state on the borders of June 4, 1967, with East Jerusalem as its capital.

The State of Kuwait stresses the importance of respecting the choices of the Palestinian people to achieve their legitimate rights in reaching a comprehensive settlement of the Palestinian-Israeli conflict, and the need for the international community to carry out its duties towards advancing the implementation of international legitimacy resolutions represented by the relevant Security Council resolutions, especially resolutions 242 and 2334.

In this context, I cannot fail to emphasize the pivotal role played by the United Nations Relief and Works Agency for Palestine Refugees in the Near East (UNRWA), and the appreciated efforts it makes in providing basic services to Palestinian refugees in its five areas of operation, which requires all of us to provide it with full support for its continuation to alleviate the suffering of the brotherly Palestinian people.

The continuation of terrorist attacks by the Houthi militia on the lands of the Kingdom of Saudi Arabia and the United Arab Emirates, is a flagrant violation of international and humanitarian law, and destabilizes the security and stability of the region, which requires serious and quick action by the international community to deter such criminal terrorist acts, and hold the perpetrators accountable. We reiterate the State of Kuwait's firm and complete stand by the brotherly states in all the measures they take to preserve their security and stability.

After more than seven years of the crisis in Yemen, the State of Kuwait affirms its support for all efforts made to reach a solution to the Yemeni crisis, based on international references, including Security Council Resolution 2216. We also value in this regard the efforts and endeavors of the Secretary-General of the United Nations and his Special Envoy in this context.  We commend, in this regard, the declaration of the General Secretariat of the Cooperation Council for the Arab States of the Gulf, in hosting Yemeni-Yemeni negotiations, during the period from March 29 to April 7, 2022, in Riyadh, the capital of the Kingdom of Saudi Arabia, wishing them success of these endeavors, and calling on all Yemeni parties to engage positively in this initiative, hoping that it would contribute to stopping the cycle of violence and conflict in Yemen and restore security, peace and stability to its territory.

Our seventeenth special meeting on the situation in Afghanistan, which was held here in Islamabad three months before our current session, emphasized our deep concern about the developments of the worsening humanitarian crisis in Afghanistan, and the consequent exodus of many Afghan refugees, which calls us to provide all forms of support and solidarity with the Afghan people to relieve their human suffering, through supporting agencies and international activities working in the relief and humanitarian field, including the Afghanistan Humanitarian Trust Fund, which was approved by our special meeting. WE also commend the outcomes of the recent visit of the Envoy of the Secretary-General of the Organization to Afghanistan.

We meet today, and the world is in dire need of moving away from extremism, radicalism and violence and linking terrorism with Islam (Islamophobia), and we warn against supporting and adopting these abuses and their continuation, whether against the true Islamic religion or all the Abrahamic religions that ignite the spirit of hatred, hostility and violence, and undermine the efforts made by the international community in In this regard. We also value the efforts aimed at spreading a culture of tolerance, peace and moderation among religions and peoples of the world, and we commend in this context the adoption by the United Nations General Assembly last Tuesday, March 15, 2022, and unanimously the resolution submitted by the group of our Islamic countries, which stipulates the adoption of March 15 every year internationally to combat Islamophobia and what this resolution represents as a clear message against racism, radicalism, discrimination and violence against Muslims.

As member states of the Organization of Islamic Cooperation, we must draw lessons and wisdoms from what our Islamic space and the world at large witnessed and is witnessing from the dire repercussions as a result of the effects of the covid-19 pandemic, in addition to the recent challenges in security, military, political, economic and other fields following the developments of the crisis in Ukraine and its repercussions on the world and our Islamic nation, these challenges and issues are multi-faceted, intertwined and complex, which knows no borders and affects various walks of life, which requires with it an exceptional confrontation based on solidarity, integration, interdependence and joint Islamic action, as no country or group of countries can address these challenges without making a collective effort and joint organized work within the framework of innovative partnerships.

Despite these and other challenges that plague our world today, we remain clinging to hope, looking forward to the future, and optimistic about our ability to work. The Organization of Islamic Cooperation, as the second largest international organization, and with its capabilities, potentials and diversity of experiences and cultures, is capable, God willing, of overcoming obstacles and prevailing the sincere Islamic spirit and consolidating its principles and its values, towards achieving positive and tangible results that are applicable on the ground and that would achieve our aspirations for security, stability, prosperity and development for our Islamic nation.

Peace, mercy and blessings of God."