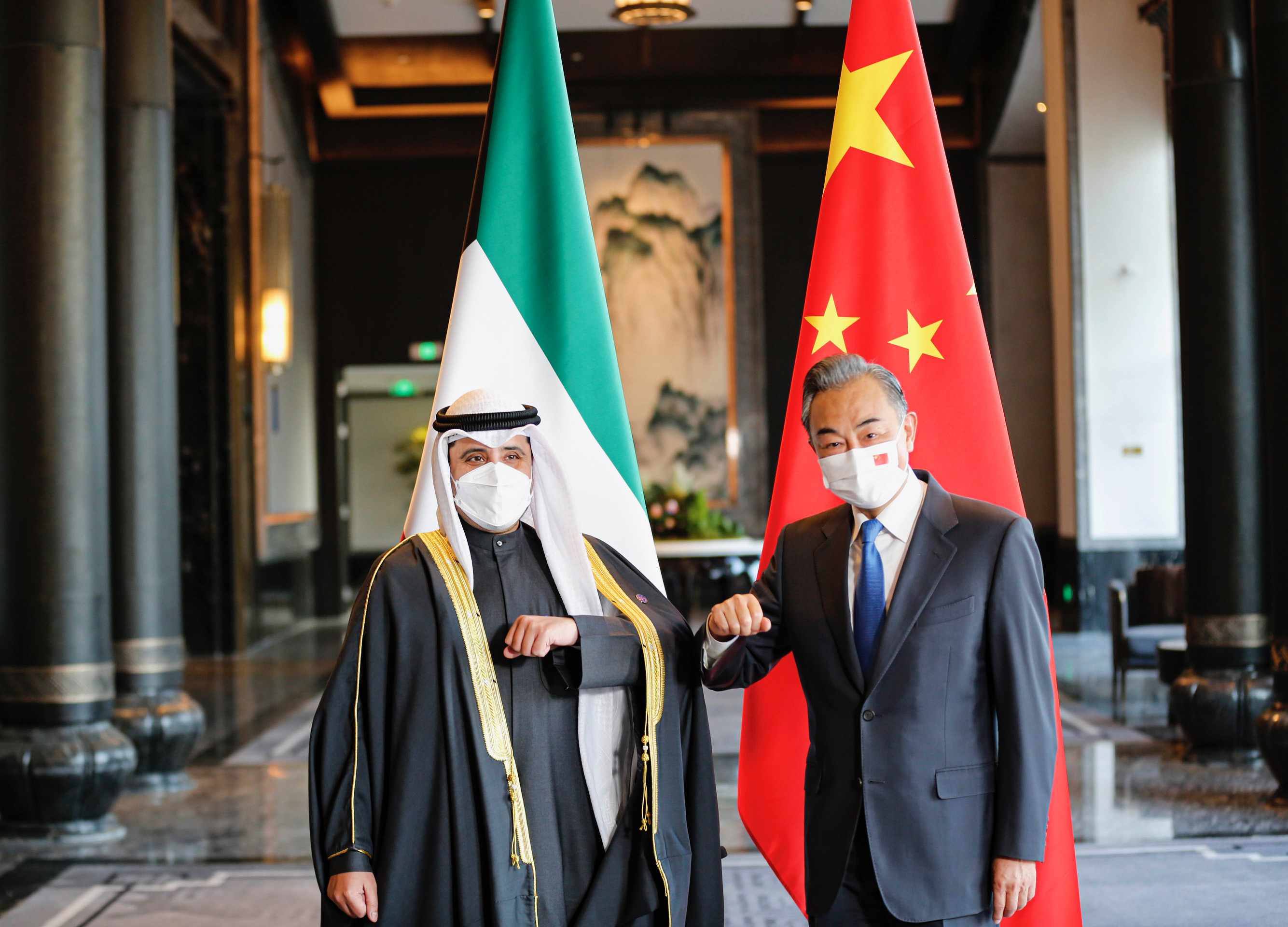 For his part, the Minister of Foreign Affairs of the People’s Republic of China conveyed the greetings of His Excellency President Xi Jinping, President of the People’s Republic of China, to His Highness the Amir Sheikh Nawaf Al-Ahmad Al-Jaber Al-Sabah, and to the State of Kuwait’s leadership, government and people, expressing his country’s pride in the path of friendly relations and the strategic partnerships that exists between the two countries in all fields, praising the high levels it has reached, hoping to raise it to broader horizons and consolidate its foundations at all levels. On the other hand, the Chinese Foreign Minister praised the level of permanent communication and cooperation between the two friendly countries on the international scene, expressing his praise for the wisdom of the State of Kuwait and the balance of its foreign policy and the efforts it is making in consolidating the pillars of maintaining peace and security in the region, adding that the State of Kuwait is a close friend of China in the Gulf, the Middle East and the Arab and Islamic world.

During the official talks, the two top officials reviewed the close historical relations between the countries of Kuwait and the People’s Republic of China, and high-level mutual visits between them, including the latest of which was the official visit of His Excellency a member of the Political Bureau of the Central Committee of the Communist Party of China and Director of the Office of the Central Committee for Foreign Affairs of the People’s Republic of China, Mr. Yang Jiechi, to the State of Kuwait on February 23, 2021, and the meeting between His Excellency the Minister of Foreign Affairs and Minister of State for Cabinet Affairs with His Excellency Mr. Wang Yi, State Counselor and Minister of Foreign Affairs of the People's Republic of China, which was held on the sidelines of the international conference "Central and South Asia”, on July 16, 2021 in the capital of the Republic of Uzbekistan in Tashkent. Where today’s session of official talks comes as a continuation of important consultative files related to the fruitful and successful results of the existing strategic partnership between the two friendly countries, and opening new horizons for joint work and cooperation between them in various sectors, embodying the desire of the leadership of the two countries in enhancing the level of strategic partnership between them and launching it towards broader, wider and more comprehensive horizons.

The official talks session also dealt with all aspects of bilateral cooperation and joint coordination between the two friendly countries in various vital and important fields, and ways to develop their future prospects in support of the common interests of the two sides. The opportunities available to develop this cooperation, especially related to the Belt and Road Initiative launched by China in 2013, were also reviewed. Which is considered an important gateway to areas of enhancing economic cooperation between the two countries, in addition to discussing multiple areas of cooperation in the context of facing the repercussions of the novel Corona Virus (Covid-19) pandemic and its variants. In particular, health, social and economic ones, and ways to enhance joint cooperation in this framework. During the official talks, they discussed the latest developments on the regional and international arenas, and exchanged views on topics and issues of common interest.