The representative of His Highness the Amir of the State of Kuwait His Excellency Sheikh Dr. Ahmed Nasser Al-Mohammad Al-Sabah, Minister of Foreign Affairs, heads the Kuwaiti delegation to the sixth annual meeting of the Board of Trustees of the AlQuds Fund and Endowment 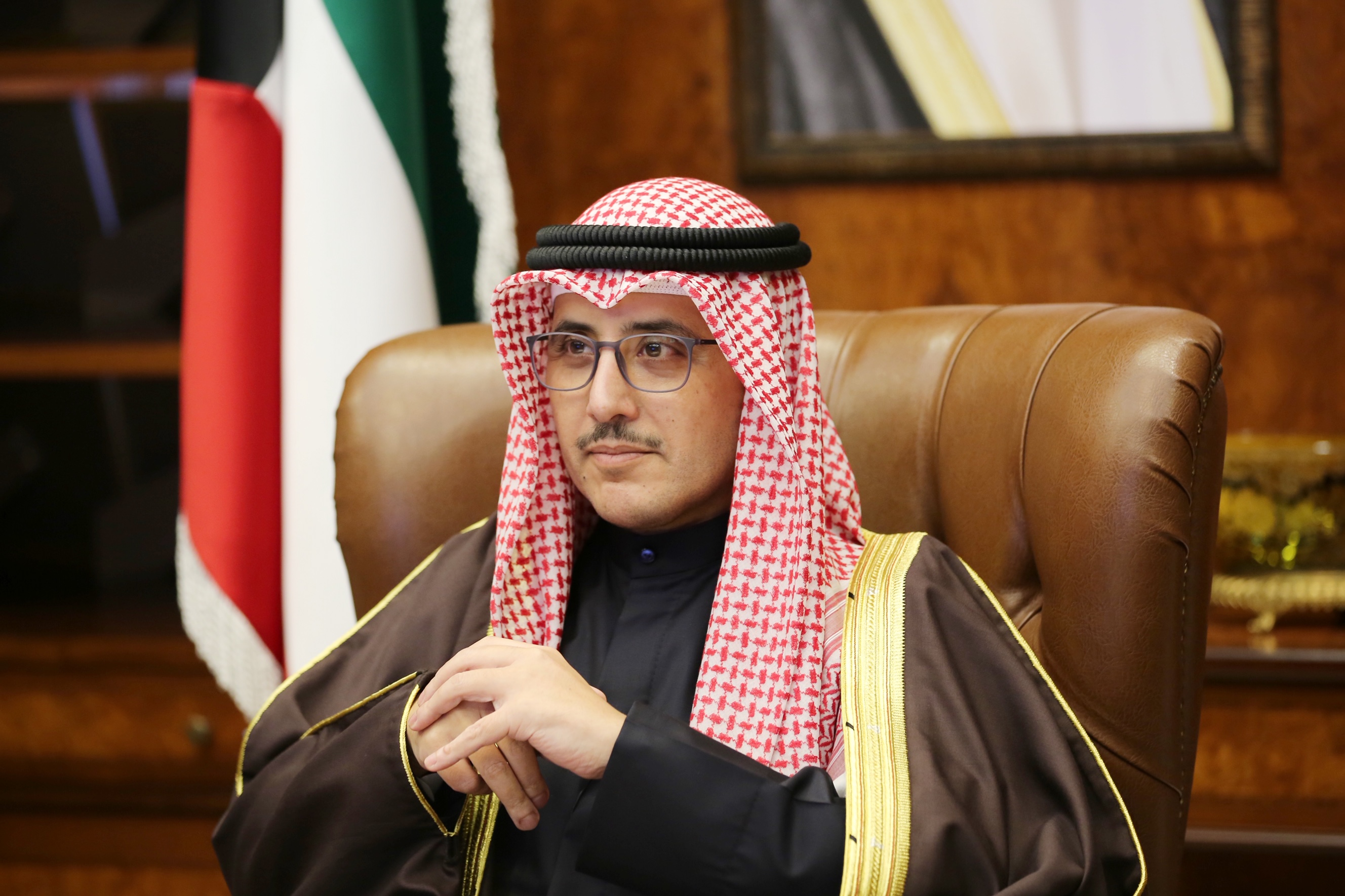 The representative of His Highness Sheikh Nawaf Al-Ahmad Al-Jaber Al-Sabah, Amir of the State of Kuwait, His Excellency Sheikh Dr. Ahmed Nasser Al-Mohammad Al-Sabah, Minister of Foreign Affairs, chaired the Kuwaiti delegation to the sixth annual meeting of the Board of Trustees of the AlQuds Fund and Endowment, which was on Tuesday, December 22nd 2020 through audiovisual communication under the title "The Course of Loyalty to the Late Sheikh Sabah Al-Ahmad Al-Jaber Al-Sabah". During which His Highness announced the launch of the charitable program of His Highness the late Amir Sheikh Sabah Al-Ahmad Al-Jaber Al-Sabah, may God rest his soul, loyalty and gratitude to AlQuds is the spirit of the Amir of Goodness and Humanity. The Late Amir has embodied throughout his life a special love for Palestine and great support for the Holy City of AlQuds and the Blessed Al-Aqsa Mosque on the moral and political levels represented by honorable militant positions and unlimited support. The program includes the establishment of the Sheikh Sabah Al-Ahmad Al-Jaber Al-Sabah Center for Quran memorization and continuing education, and the launch of the Sheikh Sabah Al-Ahmad Al-Jaber Al-Sabah Fund for scholarships for orphan students in Palestinian universities. The AlQuds Fund and Endowment seeks to invest in this program, strengthen it, develop its resources, enhance its development projects and diversify them in the city of AlQuds, and contribute In building residential endowments, and supporting impoverished and poor families, in honor and loyalty to the spirit of the late Amir and the State of Kuwait.
His Excellency delivered the speech of the State of Kuwait at this meeting, the text of which came as follows:
“In the name of Allah, the Most Gracious, the Most Merciful,
Your Royal Highness Prince Turki Al-Faisal bin Abdulaziz Al Saud - Chairman of the Board of Trustees of the AlQuds Fund and Endowment,
Your Excellency Dr. Muhammad Ibrahim Shtayyeh - Prime Minister of the State of Palestine,
Your Excellency Brother Munib Rashid Al-Masry - Chairman of the Board of Directors of the AlQuds Fund and Endowment,
Your Highnesses, Excellencies,
Ladies and Gentlemen,
At the outset, it gives me pleasure to convey to you the greetings of His Highness the Amir of the State of Kuwait, Sheikh Nawwaf Al-Ahmad Al-Jaber Al-Sabah, and convey his wishes for our meeting to end in success and prosperity.
I would like to express my pleasure and honor to participate in the official announcement ceremony for the launch of the charitable program for the late Amir His Highness Sheikh Sabah Al-Ahmad Al-Jaber Al-Sabah, may God rest his soul, expressing in this regard my sincere thanks and praise to the Chairman and members of the Board of Trustees of the AlQuds Endowment Fund for the great efforts they make and their distinguished achievements in order to achieve the objectives of the AlQuds Fund and the Endowment at all levels of humanity and development, to capture the most wonderful pictures of giving in seeking the humanitarian and development needs of the brotherly Palestinian people, and embody a sound vision in transforming the fund from an implementing institution to a donor institution to ensure continuity.
Your Highnesses, Excellencies,
Ladies and Gentlemen,
The Palestinian issue was at the top of the concerns of the late, God Almighty willing, His Highness Sheikh Sabah Al-Ahmad Al-Jaber Al-Sabah, may God rest his soul, so this issue was the present file in all regional and international meetings, and may God have mercy on him solid in defending it, generous in his giving to it. Embodying the dimensions of the Kuwaiti position in support of the Palestinian right to establish an independent state with East Jerusalem as its capital, stressing the necessity of commitment that the solution to this issue should proceed through international legitimacy decisions, the Arab Peace Initiative and the two-state solution, and God have mercy on him was supportive of the Palestinian brothers, whether for the Palestinian Authority or through specialized international agencies And encouraging and motivating Kuwaiti public benefit societies to carry out their duties towards our Palestinian brothers, and I do not fail to mention the special attention that the Jerusalem Fund and Endowment Fund received from His Highness, may God have mercy on him, when the State of Kuwait, under the patronage of His Highness, hosted the fourth meeting of the Board of Trustees in 2018.
Your Highnesses, Excellencies,
Ladies and Gentlemen,
And while I am talking about the virtues of our great late Amir and his contributions in support of the Palestinian cause, I recall His Highness’s keenness to include in the first statement of the State of Kuwait in 1963 before the United Nations indicating its position towards the Palestinian cause and its support for this just cause, and I quote from that statement:
"Kuwait raises its voice against the unfair injustice under which the Palestinian people live, and that the length of time will not deprive the Palestinian people of the legitimate rights to return to their lands, and that the fait accompli cannot be a stable basis for peace."
The State of Kuwait will remain steadfast in its position towards the Palestinian brothers and their just cause under the leadership of His Highness the Amir, Sheikh Nawwaf Al-Ahmad Al-Jaber Al-Sabah, and His Highness Crown Prince, Sheikh Meshaal Al-Ahmad Al-Jaber Al-Sabah.
In conclusion, I reiterate my thanks to all of you, wishing you all success and prosperity, and peace and God's mercy and blessings be upon you.”
The Kuwaiti delegation included His Excellency Ambassador Fahd Ahmed Al-Awadi, Assistant foreign Minister for Arab Affairs, His Excellency Ambassador Saleh Salem Al-Loughani, Assistant Foreign Minister for the Office of the Minister of Foreign Affairs, and a number of senior officials of the Ministry of Foreign Affairs.