His Excellency Sheikh Dr. Ahmed Nasser Al-Mohammad Al-Sabah, Minister of Foreign Affairs and Acting Minister of Information leads the Kuwaiti delegation to the work of the 47th Session of the Meeting of the Council of Foreign Ministers of the Organization of Islamic Cooperation Council (OIC) 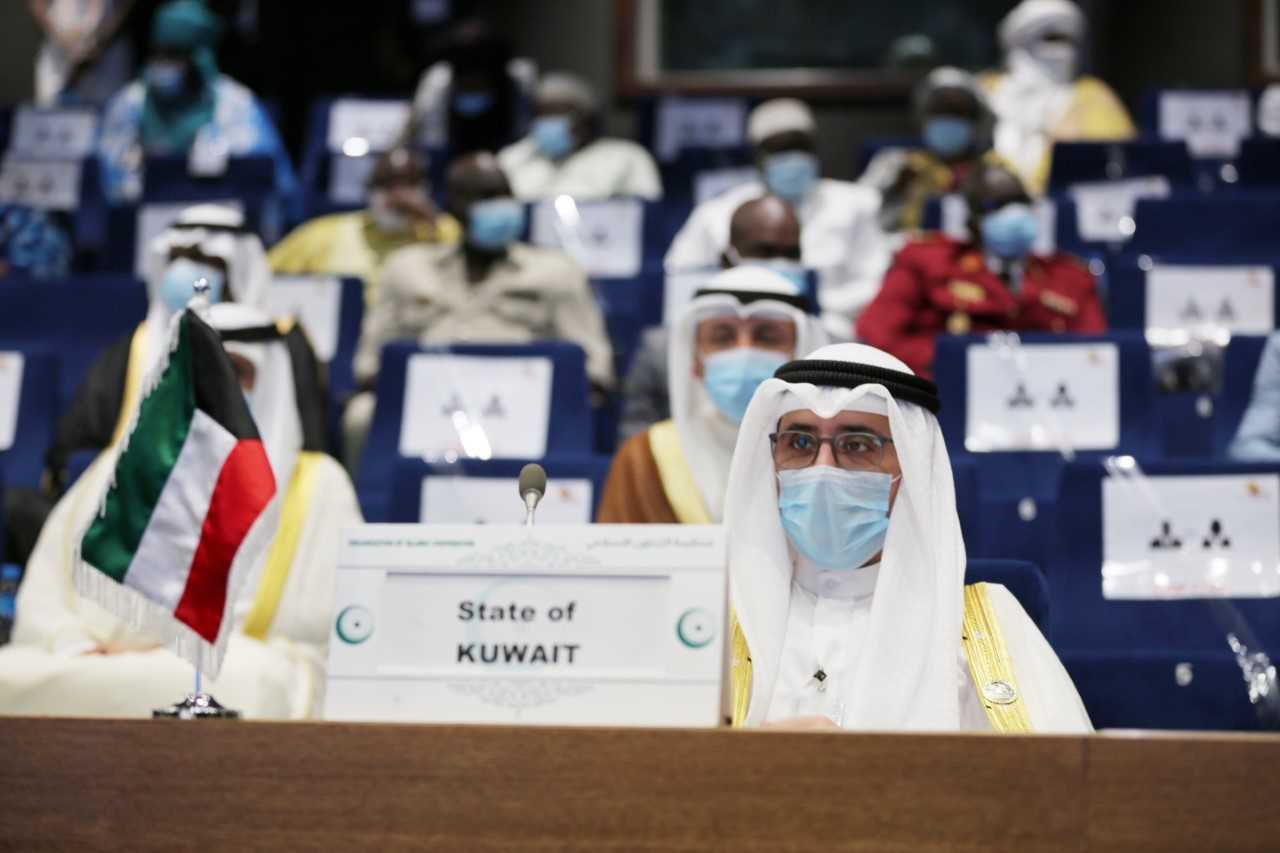 His Excellency Sheikh Dr. Ahmed Nasser Al-Mohammad Al-Sabah, Minister of Foreign Affairs and Acting Minister of Information, led the Kuwaiti delegation to the work of the 47th Session of the Meeting of the Council of Foreign Ministers of the Organization of Islamic Cooperation, which was held from 27 to 28 November 2020 in Niamey in the Republic of Niger under the theme "United Against Terrorism for Peace and Development".

His Excellency Sheikh Dr. Ahmed Nasser Al-Mohammad Al-Sabah delivered the statement of the State of Kuwait during this meeting, the text of which was as follows:

In the name of God, the Most Gracious, the Most Merciful,

Prayers and peace be upon the most honorable of people and messengers, our Prophet Mohammed and upon his family and companions,

Your Excellency Kalla Ankourao, Minister of Foreign Affairs, Cooperation, African Integration and Nigeriens abroad in the Republic of Niger,

Your Excellencies, Ministers of Foreign Affairs of the Member States of the Organization of Islamic Cooperation,

At the outset of my statement, it is my pleasure to renew my thanks and deep appreciation to our brothers in the Republic of Niger for the kind accommodation, generous hospitality, and warm welcome we have enjoyed, and to commend all the efforts made in preparation for the conduct of our meeting today. And I cannot forget to express my deep thanks for the invitation to this timely meeting, which is timely in light of the developments and challenging conditions that we are witnessing in our Islamic world and in the entire world. I would also like take this opportunity to congratulate the Republic of Niger on their chairmanship of our esteemed council, and wishing them abundant success and prosperity. In that regard, we would like to praise the tireless efforts and important achievements of the brotherly country of the United Arab Emirates during their chairmanship of the work of the 46th Session, carried out efficiently and professionally. We would also like to thank His Excellency Dr. Yousef bin Ahmed Al-Othaimeen, Secretary General of the Organization of Islamic Cooperation and all members of the General Secretariat for their outstanding efforts.

Allow me to extend to you the most sincere appreciation and gratitude for the sincerity of feelings and great sympathy expressed in offering condolences for the death of the leader of humanitarian work, the late Amir His Highness Sheikh Sabah Al-Ahmad Al-Jaber Al-Sabah, may God rest his soul.

And we cannot forget to extend our deepest condolences and sincere sympathy to His Excellency President Issoufou Mahamadou and to the government and people of Niger on the death of His Excellency the former President of the Republic of Niger, Mamadou Tandja, may God rest his soul.

Last year, we celebrated the fiftieth anniversary of the founding of our valued organization, and we appreciate what has been achieved to support the relations bonding member states, but we still have a path ahead to achieve the goals and aspirations to strengthen joint Islamic action. Unfortunately, our Islamic nation of today faces difficult conditions, which are a source of concern. Much of the population of the Islamic world suffers from poverty, marginalization, asylum, displacement and unemployment, which calls on us all to work hard to achieve the aspirations and dreams of the people of our Islamic nation.

The 47th Session of the meeting of our esteemed council is held today under exceptional and very challenging circumstances, as the whole world has suffered from the outbreak of the novel Coronavirus (COVID-19). Mankind continues to suffer pain and misery due to the spread of this pandemic that has taken the lives of innocent people and left many ill in its wake.  The novel Coronavirus has effected various aspects of life, and in this regard, we highly commend the role played by the General Secretariat and its various agencies in confronting and responding to this pandemic through convening important meetings, and through their support for countries in building capacity to confront this epidemic. We ask the Almighty to lift this calamity weighing upon the shoulders of mankind, and to bless the souls we have lost with His mercy, and to speed up the recovery of the afflicted, through His grace.

Our region is going through difficult conditions and many challenges, foremost of which is the Palestinian issue, the essential and central and historical issue of our esteemed organization. The developments witnessed in the Arab and Islamic nations call upon us all to join hands and work together to confront the continuous violations. From this platform, I can only call for further efforts to achieve what we collectively seek: a just and comprehensive solution.

Throughout the years, my country has stood with the rights of the Palestinian people, and we have not and will not spare any effort to support Arab, Islamic, and international efforts that will bring us all the long-awaited hope for establishing an independent Palestinian state with East Jerusalem as its capital based on the June 4, 1967 borders, and in accordance with international legitimacy, relevant Security Council resolutions and the Arab Peace Initiative of 2002.  We reconfirm our principled and steadfast position in supporting the choices of the Palestinian people to obtain their legitimate rights, and the importance of continuing efforts to re-launch negotiations within a specific timeline to reach a just and comprehensive peace.

The crisis facing Rohingya Muslims is one of the most prominent humanitarian crises and challenges, especially considering that it is the fastest growing humanitarian crisis in the world, and that the Rohingya minority is the most oppressed. We highly appreciate the role of the Government of Bangladesh in supporting and hosting displaced persons and refugees from the Rohingya minority, and likewise appreciate the support all the countries provide in this crisis.  We highly commend the historical judgment issued by the International Court of Justice in favor of the Rohingya regarding interim measures to prevent acts of genocide by the government of Myanmar at the beginning of this year, and we also praise the role of the government of Gambia in filing this case on behalf of the OIC countries. In this context, we announce a donation by the State of Kuwait to the specialized fund to support the case in the International Court of Justice in the amount of 150,000 thousand US dollars.

From this standpoint, we are deeply concerned about the deteriorating security and humanitarian conditions facing the countries of the Sahel region and the Lake Chad Basin, and the of instability resulting from terrorist attacks by armed groups. The weight of this human tragedy is a burden carried by innocent civilians, and leaves behind a wake of hunger, poverty and increased numbers of displaced people and refugees. We call upon member states and the international community for much needed solidarity and cooperation to enhance security and stability, and for cooperation between governments to enhance the capacity of the countries concerned in confronting the danger and threat posed by armed groups. In this context, we express our support for all regional and international initiatives that contribute to further security, stability and prosperity to the region.

We are likewise deeply concerned about the recent rise and growth of the phenomenon of phobia or fear of Islam, also known as Islamophobia, in the West with a dangerous upward trend. We here reconfirm that the Islamic religion is a religion of love, peace and tolerance, and that terrorism has no religion or faith. We regret that matters have led to the publication of images abusive of the Last of the Prophets and Messengers, our Prophet Mohammad, to Peace Be Upon him. We warn of the consequences of supporting and continuing these policies – equally for all monotheistic religions and prophets, peace be upon them – by some official political speeches that ignite the spirit of hatred, hostility and violence, and undermine efforts made by the international community to suppress it, as it represents a grave offense to the feelings of Muslims around the world. We reiterate our support for the statement by the Organization of Islamic Cooperation, which expressed how the Islamic nation had been effected, calling for the spread of a culture of moderation and tolerance and the rejection of all manifestations of violence, extremism and radicalism. In this regard, we take the opportunity to praise the valuable efforts made by the organization to fight the phenomenon of Islamophobia since the events of September 11, 2001 to the present day, and we welcome the initiative of the Prime Minister of the Islamic Republic of Pakistan on the subject of Islamophobia.

In conclusion, I can only express to you my sincere appreciation for the relentless efforts of member states and the hard work undertaken in the framework of joint Islamic action. We affirm the importance of continuing coordination for the benefit the peoples of the entire Islamic world. We extend our sincere appreciation for the efforts made by the Organization of Islamic Cooperation's General Secretariat for their well-organized preparation for our meeting. And may God grant us success, and what is in the best interest of our Islamic nation, wishing our meeting here all success.

Peace, mercy and blessings of God upon you all."